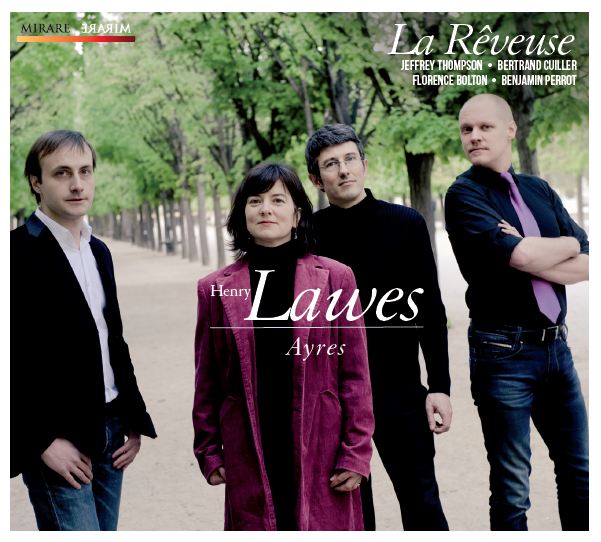 Born in the final years of the reign of Elizabeth I, Henry Lawes(1595-1662) lived through the troubled timesof 17th-century England. The brother of the charismatic but short-lived William Lawes (1602-45), he was acknowledged in his day as one of the finest composers for the voice. With his extended vocal ranges, his expressive melodic formulas, his vibrant dissonances and the high poetic quality of his texts, Henry Lawes is a subtle painter of the melancholy of his age, situated between John Dowland and Henry Purcell.

“(…) the singer approaches the songs with an extravagant, very theatrical style, for which his formidable technique well equips him (…). The instrumental pieces are excellently played, and Florence Bolton is fine player of both treble and bass viols”
Robert Oliver – Early music Review, sept. 2013

“This release of consort songs places the spotlight on tenor Jeffrey Thompson, who possesses an attractive lyric tone, good agility and ornamentation, and excellent control of dynamics. He turns in wonderfully brash performances (…)
He is ably seconded by the other members of La Rêveuse, who in turn perform very well a series of solo and group instrumentals interspersed throughout the program. (…)”
Barry Brenesal – Fanfare Magazine, July/Aug 2013

“La Reveuse Ensemble serves up baroque delights
One of the ideals of baroque music was to move the listener’s emotions. On Wednesday La Reveuse Ensemble, together with the American-born tenor Jeffrey Thompson, did just that at the French Embassy, edging close to opera in the group’s virtuosity, inner energy and dramatic flair. (…) Thompson and the ensemble didn’t miss an opportunity to indulge in ravishing improvisations not written in the scores, coupled with a flashing declamatory approach to specific words. (…) The instrumentalists, too, clearly grasped every the dimension of baroque performance style with extraordinary technique”
Cecelia Porter – Washington Post, March 29, 2012