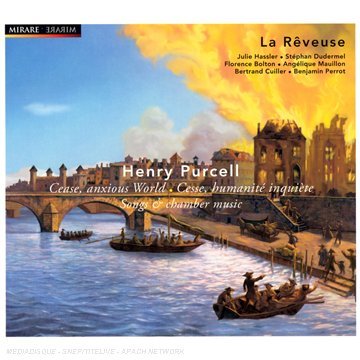 This recording constitutes the second instalment of our work on english music from the second half of the seventeenth century. It presents a mixture of pieces from Orpheus britannicus (published for the first time in 1968) and older airs taken from The Theater ok musick, a collection by a number of successful composers, aimed at amateur musicians, which was issued by John Playford between 1685 and 1687.

“Hassler’s pure tone, delicate decorations, easy phrasing and profound connection to the poetry are complemented by La Rêveuse’s ensemble of violins, triple harp, organ, harpsichord and theorbo. The impression is of a world in which joy slides into sadness, sadness into joy. Pick of the Album : A slow, beautifully controlled reading of ‘O let me weep'”
Anna Picard – The Independent, Juin 2008