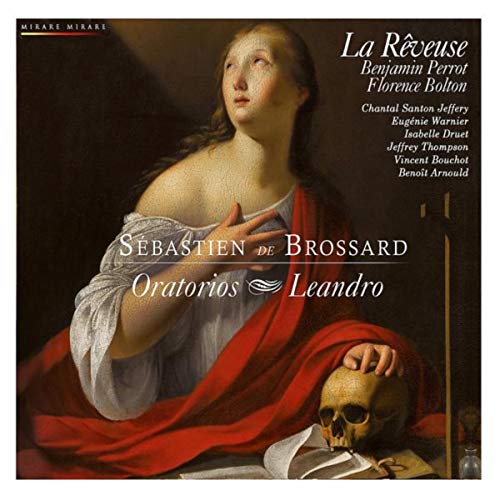 Sébastien de Brossard (1655-1730), an enthusiastic collector of music, pedagogue and author of the first dictionary of music, was also a very talented composer. This champion of Italian music and great connoisseur of the music of Carissimi probably took the Roman master as the model for his two oratorios. Leandro, a dramatic work in Italian, is a miniature masterpiece and one of the earliest cantatas by a French composer.

“Elegant, refined, the musicians of the ensemble La Rêveuse have chosen to open this recital with an unpublished oratorio. (…)”
Marie Aude Roux – Le Monde, 24 July 2011

“This recording, made with as much intelligence as it was with feeling, brilliant, but without being fussy, and of undeniable maturity, is a splendid homage to a composer who is still too little known and it is a credit to the musicians who took part in it(…)”.
Jean Christophe Pucek – Passée des Arts, 05 May 2011

“The music takes off with the very beautiful and contrasting Sonata in C and flies even higher with the admirable cantata Leandro celebrating the drama experienced by the hero. Dressed in superb music, this story ,just like the fishermen to whom it was told, is destined to make us weep too, “versasse pianto”. All of Sébastien Brossard is there: a man of culture, of faith – poet, musician and humanist (…)”.
Bénédicte Palaux Simonet – Crescendo, August 2011

“La Rêveuse is quite right and in a very lively, alert and energetic way, to allow us to discover such dramatic scores (…)”
Elvire James – Classique News, 7 July 2011